Home »Beeline»MSBA Elections: What You Are Voting For 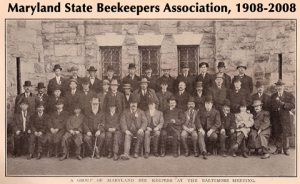 Each year MSBA asks members to vote for officers: do you know what you are voting for?

Your state beekeeping club collects your dues and oversees tens of thousands of dollars in resources in pursuit of this non-profit organization's mission: "to promote scientific and practical bee culture, promote the use of honey and other bee products, and to secure such legislation as is necessary to protect and further the beekeeping industry and to advance the interests of its members."

During every General Meeting of the Maryland State Beekeepers Association, Inc., since its founding in 1908, members have been asked to participate in a series of administrative rituals that usually receive little discussion, despite their importance. Our Treasurer presents a budget to the membership, awards are given to those who have given special service in the past year or years, and you get to select the people who will guide this 111 year old organization with 721 paid members and about $45,000 in the bank through its next 12 months.

Who are these people? What do they do?

What follows is not a lawyer’s description, but an attempt to make the Board familiar and accessible.

The MSBA Board was created by our bylaws, essentially the founding documents of the incorporated 501(c)3 organization that creates this newsletter and holds these meetings. It meets three times a year, usually for 2 hours, and a month in advance of the member meetings in February, June, and November.

Currently a majority of the folks who are on the Board participate on a regular basis! The Board meets when the number of participants meets quorum (a minimum of 8 voting members).

Who’s Who on the Board?

Most of the board is made up of Second Vice Presidents representing 23 Maryland counties and Baltimore City, as well as DC. They can attend board meetings by free conference call or in person, and are asked to meet two responsibilities: to keep MSBA apprised of local issues and to inform about and promote MSBA to local beekeepers. 2ndVPs can be nominated by local clubs, but all board members must join the association, and usually those who serve as 2nd VP continue from year to year. It is perfectly OK for there to be more than one candidate, on whom the membership can vote.

The next largest group on the Board is Directors, of which there are three, as well as an EAS Director. Directors can serve up to two 1-year terms in a row, and we try to make those term limits run out on no more than two at once to ensure continuity. Their job is to suggest meeting topics (especially scientific ones), write articles, help initiate legislative activities, and to keep the rest of the Board compliant with the rules.

The EAS Director is different: that job requires making sure that Eastern Apicultural Society knows what we care about, and that we understand EAS’ role and activities. The EAS Director attends their board, and usually the Annual Conference, and reports back to us
about the wider world of beekeeping.

The two immediate Past Presidents (right now that's Jim Fraser and Allen Hayes) also get to vote, but have otherwise already done their share!

The Secretary’s job is pretty self-explanatory: this officer takes notes at all Board and membership meetings, distributes them, and keeps these records. The Secretary also gets copies of all correspondence and documents relevant to how the organization governs itself and works with others.

The next two roles are mainstays of this organization.

The Treasurer does just what it sounds like: manages the money, and all the records around it, while keeping the Board informed of all the above. The Treasurer takes care of the bank accounts, manages your membership, and gets us audited from time to time. Bob Crouse was a remarkable foundation stone for the MSBA in this role for several years, and left us in great shape. Stefanie Ottenstein has continued the work of making sure that we have met all the financial, regulatory and insurance criteria that apply to non-profits these days.

The First Vice President functions as the Program Chair for MSBA, and finds places and times for all Board and membership meetings, recruits speakers, manages all the vendors and tables, works with the volunteers who provide AV and refreshments. In November, the First VP also recruits judges and volunteers for the Honey Show, and always negotiates all the arrangements the speakers need to get to and from us. Other officers assist the 1st VP in many of these tasks.
The President is also limited to two one-year terms, and 2021 is the end of Kim Mehalick's time as president. That  job isresponsible for calling meetings, compiling reports, appointing committees, and representing  the association in places like Annapolis and to outside organizations like the press or the Farm Bureau.

How are officers selected? What if you would like to serve?

The Board term limits are a good idea, because it keeps new people flowing through our team. Before each election, a Nominations Committee is appointed to reach out to existing and potential officers about playing a role on the board. This year, the Nominating Committee is run by Toni Burnham assisted by Maureen Jais-Mick and Mary Laura Fitzgerald, and they may recruit helpers. If you are interested, it’s a good idea to get in contact.
For a more formal explanation of Board roles, you can
also see our Constitution and Bylaws at http://www.mdbeekeepers.org/downloads/MSBA_Constitution_Revised.pdf