The George Imirie Education Fund was founded by Maryland beekeepers in honor of his lifetime of beekeeping education excellence. MSBA manages this fund, and presents a monetary award each year to a member beekeeper who follows in his footsteps. For your TAX purposes, MSBA's non-profit tax ID is 52-1887350

CLICK the 'Donate' button below to donate with credit card

Archives of George's newsletter, the Pink Pages, can be accesses HERE 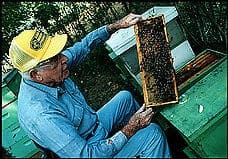 George Imirie Jr. with one of his bee colonies. He also helped run his family's auto parts business. (By Tom Allen -- The Washington Post)

George Wady Imirie Jr., 84, a master beekeeper who tirelessly promoted the value of bees and beehives, died of congestive heart failure Sept. 6 at the Casey House in Rockville.

As a beekeeper since 1933, Mr. Imirie knew enough about the stinging insects to brave the swarms at his Rockville home without the usual head-to-toe beekeeping garb.

"Bees don't like socks, especially woolly ones," he told a reporter in 1997. "A hat is a good idea, because if a bee gets tangled up in your hair, it'll sting you. I don't wear a shirt, because that way, if a bee is on me, I can feel it and brush it away."

Far more than stings, Mr. Imirie worried about the decline in bee colonies over the past several decades, infestation of the wild bee population by mites, and the level of knowledge and skill of those who keep apiaries.

"He definitely was someone who didn't feel it necessary to tolerate any ignorance around him," said Marc Hoffman, a member of the Montgomery County Beekeepers Association, which Mr. Imirie founded. "He would interrupt someone to ask, 'How many hours is it before the larva emerges from the egg?' and you'd better know the answer."

But he also shared his knowledge, writing an opinionated and blunt newsletter called the "Pink Pages," which addressed how to prevent swarming, how to prepare in fall so bees would overwinter well and how to deal with pests. The newsletter was read by beekeepers around the world. He coined a phrase now popular in bee circles, "Be a bee-keeper, not a bee-haver."

In addition, Mr. Imirie and his sons thrilled Montgomery County Fair visitors and schoolchildren with demonstrations with a live hive of honeybees.

A Bethesda native born to a family that has been in the area for 298 years, Mr. Imirie started tending hives at age 9, following in the footsteps of his father and grandfather. He dropped the hobby when he went to the University of Michigan for his undergraduate degree.

He was studying for a graduate degree in atomic engineering when World War II broke out. He was briefly in the Army, then joined the Manhattan Project in Oak Ridge, Tenn., and Los Alamos, N.M., working on the atomic bombs that were dropped on Hiroshima and Nagasaki.

After the war, he studied engineering at Washington University in St. Louis and American University, one of his sons said. Mr. Imirie returned to Bethesda and helped run the family auto parts business for most of his working life until it was sold 18 years ago.

Mr. Imirie resumed beekeeping on his six-acre property in Rockville. He set up the hives in a square around a gnarly old apple tree. A hedge trimmed to a height just taller than Mr. Imirie surrounded the yard so that when bees emerged from the hives in search of nectar they would fly high enough to clear the bushes and avoid bystanders.

He founded the beekeepers association in the 1980s and for many years ran it almost single-handedly. After five strokes in 1990, Mr. Imirie began using a scooter. Throat cancer further slowed him in the late 1990s.

When Maryland agreed to produce auto license plates with a beekeeping insignia, Mr. Imirie was given the prototype, BEE 001, which he affixed to his scooter.

The association named its annual award for education after him.