Dr. Dave Tarpy of North Carolina State University, is a widely recognized authority on queen behavior and honey bee genetics, and is the only individual every to receive both of EAS' highest awards: the 2016 Roger Morse Outstanding Teaching/Extension Service/Regulatory Award and the Hambleton.
Dr. Tarpy is a full professor and North Carolina Extension specialist in honey bee biology and beekeeping. He has an extensive roster of online classes called the "Beekeepers Education and Engagement System."
Dave received his B.S. from Hobart and William Smith Colleges in 1993 and a master’s degree in biology from Bucknell University in 1995. He completed his PhD. at UC Davis in 2000 and became a National Science Foundation and USDA Postdoctoral Fellow at Cornell University with Dr. Tom Seeley. Since 2004, he has led undergraduate, graduate and Extension programs at North Carolina State University. He was promoted to full professor in 2014 and was recognized as a University Scholar for 2015-2020.
Dave has had a distinguished number of undergraduate advisors and graduate students plus post- doctoral students in his 15-year tenure at NC State. His publication list is extensive and varied with numerous collaborators. He has been a major contributor to both the CAP- and BIP-funded national bee health initiatives. He has received numerous awards for his research funded through a variety of grants.
Dave is renowned for his distinguished teaching and extension accomplishments. He is a caring and considerate mentor and helps all students as part of the faculty advising and mentoring committees. He was honored with the Gertrude Cox Award for Innovative Excellence in Teaching and Learning with Technology for his Advanced Bee Biology course.
In addition to his being a leading bee scientist and University instructor, in his Extension Service and outreach to the beekeeping and public community. Dave has been recognized as Alumni Outstanding Extension and Outreach Award recipient, inducted into the NC Academy of Outstanding Faculty engaged in Extension and has received an Outstanding Extension Service Award. In addition to over 77 referred research publications, he has an extensive list of extension/general publications, presentations and outreach activities. He is a popular EAS speaker and has been included now several years on our annual program and short course. He is a Journal of Apidologie editor and served on the EAS Board from 2004 to 2014.
MSBA Members: Get Zoom Meeting Link 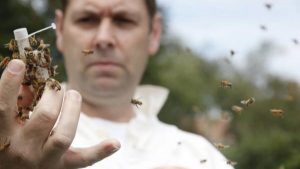 David Tarpy, of the Department of Entomology and Plant Pathology, NCSU