There is an old custom in Old World beekeeping that some carry on in the New World, that is telling the bees when the beekeeper dies. This was done in the belief that the bees would leave if they learned on their own that their keeper was gone. So, we must tell the bees of the passing of their extraordinary friend, Ann Harman.

Beekeepers in Maryland who started keeping bees “only” twenty five years ago or so may not know who Ann Harman is, except as a monthly contributor of articles in Bee Culture Magazine (over 40 years), or as an officer, speaker or honey judge at the Eastern Apicultural Society meetings, because she spent the last twenty plus years in Virginia. Beekeepers in Northern Virginia should know Ann, but may not know her Maryland background. I would like to share a few memories about Ann Harman, a Maryland State Beekeepers Association past-president and dedicated bee servant, from Maryland beekeepers who had the privilege to work with her and call her a friend. 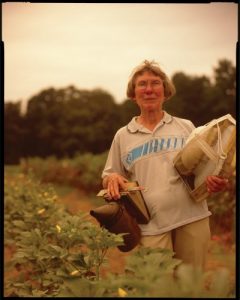 I met Ann at my first beekeeping class, in 1984 at the University of Maryland Apiary Building. She was demonstrating sweeping bees off a comb using a goose wing. She and Lanie Odland brought Dr. Larry Connor to teach the class after Dr. Dewey Caron moved to Delaware.

In 1994, when I was MSBA President, I asked Ann to teach a class on honey judging for MSBA members. Maryland was low on honey judges and the then current Apiary Inspector, Bart Smith, asked if we could help. I took the class myself and began my apprenticeship under Ann and Bart. I had the privilege of judging at two EAS honey shows alongside Ann and called upon her whenever I needed to discuss a principle or finer point of honey judging. The “Maryland Judging Standards” was “Prepared by Ann Harman and Dr. Dewey Caron” and still carries their names to this day. She and MSBA Past-President Ernie Miner compiled “Honey Recipes from Maryland Kitchens”, published by the Maryland Department of Agriculture, Dept. of Marketing (MDA Pub 55, undated) and the Cooperative Extension Service. These were prize-winning recipes from the Maryland State Beekeepers Association annual Honey Show. Ann also was a certified Welsh Judge and judged at the British National Honey Show. I knew Ann as modest but not shy, incredibly knowledgeable but not boastful, always certain of herself but open to discussion and new ideas.

Ann was an excellent and dedicated teacher. She was willing to go to any meeting and speak on any subject in order to advance the beekeeping skills in any club. She was a person of precision and order in her work. Her presentations were very thorough. Former MSBA Vice-President Adele Morris said when she attended a presentation by Ann on preparing exhibits for honey shows, she took good notes and began winning blue ribbons immediately afterwards. “Ann was very exact about the fine points of preparing honey and other exhibits for shows and how it was judged.” 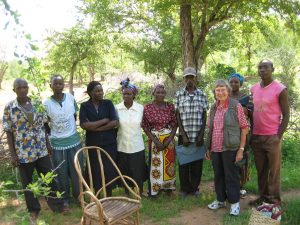 Ann was an indelible fixture at EAS after she became the Maryland EAS Director in 1987. As Dewey Caron writes in an article for Bee Culture a few years ago, in 1981 Ann was in the first group of beekeepers certified as an EAS Master Beekeeper. She went on to become a tester and grader of the exams. In 1990, as MSBA President, she brought the EAS Conference to Salisbury, Maryland and presided over that meeting as President of EAS. This was the first EAS Conference Adele and I attended. In 2000 she helped then-MSBA President David Bernard to bring EAS to Salisbury again. She filled many jobs at EAS. She organized the EAS honey shows for 25 years and established the standardized EAS Honey Show Criteria. She was the EAS Vice-Chair for 15 years and acting-Chair the year while Dewey was on sabbatical. As Dewey describes her, she not only was the EAS energizer bunny but the “go-to” and “how we previously did it” person for over 30 years. (see https://www.beeculture.com/ann-harman-worker-bee-extraordinaire/)

Is it any surprise that her email address was “ahworkerbee” (“ah” – “Ann Harman”)?

MSBA Past-President Steve McDaniel recalls, “Ann helped me start the first Maryland Honey Festival in 1983 to celebrate MSBA’s 75th anniversary. She was always willing to give a talk on honey cookery, though I never did manage to persuade her to don a bee beard. That was John Romanik’s specialty, anyway. The festival continues to this day, as Oregon Ridge Nature Center’s Honey Harvest Festival, the first weekend in October. “

Steve continues, “Ann had a great sense of humor, and it was rare to see her without a smile. At one EAS at VMI years ago, I saw her talking to a campus policeman, and I couldn’t resist pulling her leg. “Officer, is this woman giving you a hard time?” I asked. Then, to Ann, “Mother, please! I told you to let me do the talking!” After a few seconds of open-mouthed shock, Ann burst out laughing; leaving the confused young constable to ask “Is she really your mother?” I thought neither of us would ever stop laughing.“

MSBA Past President David Bernard recalls Ann’s work with the Montgomery County Beekeepers Association, which she helped create along with George Imirie, another MSBA Past-President. “The two had a push-pull relationship within their uneasy partnership founding and running the Montgomery County Beekeepers Association in the early 1980s. I can remember many occasions where Ann would roll her eyes with frustration while muttering about George’s latest bee proclamation. The two of them were quite impactful on Maryland beekeeping but were not always received in a positive way, as contrasted to the genuine good nature of Ernie Miner (who served as MSBA President between Ann and George).”
“The three of them together represented an immense wealth of beekeeping knowledge and were an excellent group of mentors for beginning beekeepers, like me, who started keeping bees in the mid-1980s. Personally, I was very fortunate to have these three people, whom now have all passed, as the immediate prior generation of Maryland beekeepers to pass down their substantial knowledge of the amazing Apis mellifera.”

Former MSBA Board member Bill Miller, now of Alabama, writes: “When I first met Ann, I was a classic bee-haver. She was one of the folks who turned me into a Master Beekeeper. I kept up correspondence with Ann after I moved to Alabama. Mary and I would see her at EAS conferences, and talking with her was always one of the conference delights. We are each loaned the privilege of life, and we each have to return our loan at some point. Ann used her loan of life well.” 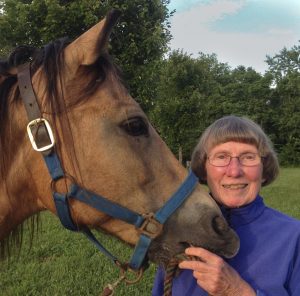 Here some things I didn’t know about Ann, or had forgotten:

Ann was a teacher, mentor, writer, organizer, leader and friend of beekeepers, authors, researchers and scientists around the world.

The family asks that donations in her name be made to scholarship funds for the EAS (contact treasurer@easternapiculture.org) or the American Beekeeping Federation (www.abfnet.org/page/donate).

Before them, under the garden wall,
Forward and back
Went, drearily singing, the chore-girl small,
Draping each hive with a shred of black.

Trembling, I listened; the summer sun
Had the chill of snow;
For I knew she was telling the bees of one
Gone on the journey we all must go!

"Stay at home, pretty bees, fly not hence!
Mistress “Ann” is dead and gone!"
Many thanks to all who contributed their memories."

We will miss you, Ann!

Back to the June 2020 Beeline newsletter