Bees Can Do Math (Not Just With Zero)

Recent research has found that bees can do more than understand zero and do basic addition – they can link symbols to numbers too.

For the first time researchers trained honeybees to match characters to specific quantities, so for example they could recognise that “two” could represent two bananas, two trees or two hats.

The discovery could lead to “exciting new pathways for future communication across species”, says lead researcher Adrian Dyer, an associate professor from RMIT University in Melbourne.

He added: “Humans have over 86 billion neurons in our brains, bees have less than a million, and we’re separated by over 600 million years of evolution.

“Discovering how such complex numerical skills can be grasped by miniature brains will help us understand how mathematical and cultural thinking evolved in humans, and possibly, other animals,” Dr Dyer said.

First year beekeeper Mark Rodden put his bees in a never-flooded field that he planted with wildflowers, and was able to turn to his mentor when the situation went, well, out to sea.

A week ago, he found his hives were floating.

Beekeeper and owner of Royal Bee Supply Brian Royal came to help: they started out in waders, but ended up loading beehives on a kayak.

"If we"It was a first, let's put it that way," Royal said, "kayaking with bees."

The men spent about two hours salvaging what they could, not without some snags. "He throws the hive on me, about dumps me in the water because it was heavy with honey," Royal said.

Rodden ended up losing 6 of his 8 colonies, but not his family, his home, or the support of his local beekeeping mentor! 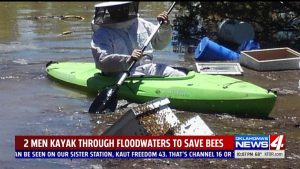 A team of researchers from Emory University and the University of Georgie, including Travis Dynes, Jennifer Berry, and Keith Delaplane have completed a multi-year study which finds that bee colonies in less dense, more visually varied apiaries enjoyed greater overwintering success and higher honey production than those in more crowded apiaries.

The abstract states, "Managed honey bee (Apis mellifera) colonies are kept at much greater densities than naturally occurring feral or wild colonies, which may have detrimental effects on colony health and survival, disease spread, and drifting behavior."

The practical advice for us? "We monitored the colonies for two years and found that the [low density] apiary configuration had significantly greater honey production and reduced overwinter mortality. Inoculation and apiary management intervention interacted to affect brood mite levels, with the highest levels in the inoculated colonies in the [high density] configuration. Finally, foragers were more than three times more likely to drift in the [high density] apiary configurations. Our results suggest that a relatively straightforward management change–placing colonies in low-density visually complex circles rather than high-density visually similar linear arrays–can provide meaningful benefits to the health and productivity of managed honey bee colonies.

A six-year-long study in Greece focusing on honey production behavior, rather than lethal effects, finds that the presence of neonicotinoid pesticides at even low doses negatively impacts honey production.

Robert Chambers of UMD, Konstantinos Chatzimichael of the Cyprus University of Technology, and Vangelis Tzouvelekas of the University oof Crete studied 60 apiaries over 6 years and found that sub-lethal concentrations of two widely used neonicotinoid insecticides (imidacloprid and thiamethoxam) detected in the nectar of flowers resulted in substantial losses in honey production for commercial beekeepers in their sample.

They also found that the impact of neonicotinoids varied with the conditions within the apiaries studied: those with more ideal conditions suffered reduced losses compared to colonies with additional environmental and pathogenic challenges.

Of 25,363 beekeepers with 544,879 colonies being managed at the start of winter, participants recorded that 89124 were lost for a variety of reasons.

This contrasts with the BeeInformed Partnership's (preliminary) loss rate of 30.7% for the US for the same 2017-2018 period. The study does not compare US and European losses or the reasons for same. 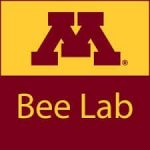 Minnesota to pay homeowners to landscape for bees

On June 3, the Minnesota state legislature and Gov. Tim Walz signed off on a new spending plan that will set aside $900,000 over the next year to help pollinators. With a lot of habitats in danger, Minnesota lawmakers are giving money back to people who make their property "bee friendly."

The University of Minnesota will receive $900,000 over the course of one year that will go towards helping homeowners make their lawns bee-friendly by replacing traditional lawns with pollinator-friendly plants such as wildflowers and Dutch White Clover.

“I’m surprised in a good way,” said Ian Lane, of the U of M Bee Lab. “I think we’re probably the first state to do something on that scale.”

Lane is a researcher with the Bee Lab, which promotes the conservation, health and diversity of bees.

“We have over 400 species of bees in Minnesota and a lot of them we don’t know the status of,” Lane said.

The state’s initiative focuses on the rusty patch bumblebee, which is a species nearing extinction.

“A lot of different bees respond and other animals will respond to these actions when you go in and you do a planting, you’re kind of increasing the amount of food in the landscape and if that’s one of their limiting factors that can really help bolster their populations,” Lane added.