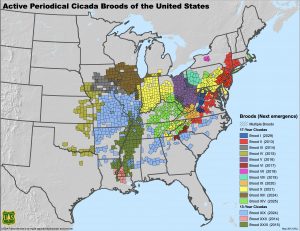 Buckle up, Mid-Atlantic arthropod advocates, our 17-year-periodical-cicada party is about to start! The yellow areas of the map above are the regions associated with the Brood XXI of the periodical cicadas, last seen in great numbers here in 2021. Three species are involved: Magicicada septendecim, Magicicada cassini and Magicicada septendecula.

Emergence typically begins in mid-May and ends in late June. We'll begin to see Brood XXI when the soil 8″ beneath the ground reaches 64 degrees Fahrenheit. A nice, warm rain will often trigger an emergence. Back in 2004, people began reporting emergences around May 13th. Learn more at Cicadamania.com

According to the National Geographic, they are good eating. Crunch crunch! 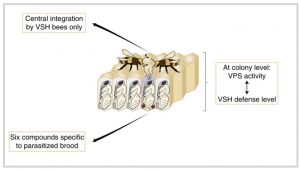 A team led by Dr. Fanny Mondet at INRAE and the University of Otago has identified 6 chemical compounds which do not occur in honey bees but whose presence apparently triggers the cleaning of cells where it is detected. Introducing the chemicals into healthy brood triggered Varroa-Sensitive Hygiene (VSH) behavior in honey bees, and appear to allow bees to discriminate between healthy and parasitized brood. According to the authors, "These findings enhance our understanding of a critical mechanism of host defense against parasites, and have the potential to apply the integration of pest management in the beekeeping sector."

Scientists agree that queen bees are failing faster now than in the past, and adaptation to the fight against the mite may play a role. A paper published this month by researchers at North Carolina State University and the University of British Columbia in Communications Biology offers clues about what’s behind queen bee failure, finding that when sperm viability is low, the expression of a protein known to act against pathogens such as bacteria and viruses is high.

A team out of Dr. David Tarpy's lab looked at 9 lines of queens, and those rated as beekeepers as "failed" had significant differences in 5 fluid proteins in the sperm. One of them, lysozyme, is a conserved "immune effector" (a compound capable of modulating or participating in an immune response), marking this as a tradeoff between increased defense against a pathogen and decreased reproductive efficacy.

Researchers have document for the first time an extraordinary collective defense used by Apis cerana against the giant hornet Vespa soror. In response to attack by V. soror, A. cerana workers foraged for and applied spots of animal feces around their nest entrances. Fecal spotting increased after colonies were exposed either to naturally occurring attacks or to chemicals that scout hornets use to target colonies for mass attack. Spotting continued for days after attacks ceased and occurred in response to V. soror, which frequently landed at and chewed on entrances to breach nests.

The study describes a remarkable weapon in the already sophisticated portfolio of defenses that honey bees have evolved in response to the predatory threats they face. It also highlights the strong selective pressure honey bees will encounter if giant hornets, recently detected in western North America, become established. 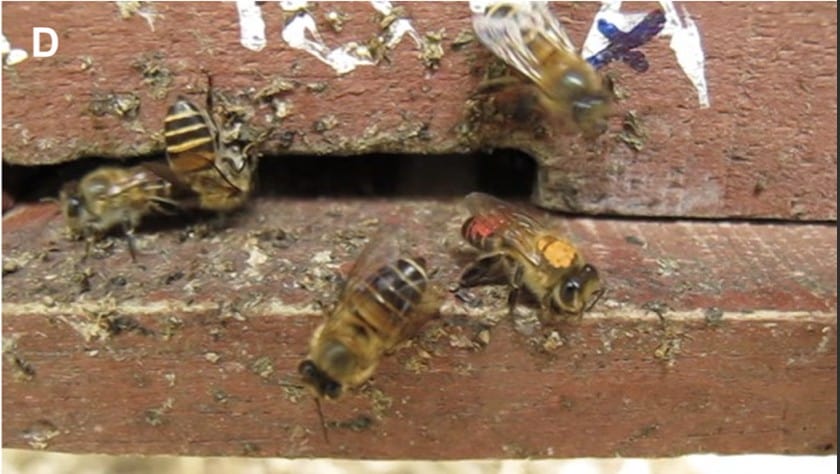 Be(e) sure to wipe your feet before entering, gals. 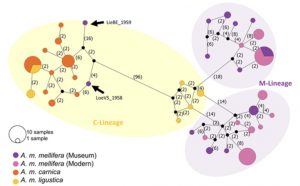 A study of both contemporary and historic Apis mellifera DNA ("Digging into the Genomic Past of Swiss Honey Bees by Whole-Genome Sequencing Museum Specimens") by Dr. Melanie Parejo at the University of the Basque Country sequenced samples of recent honey bee stocks as well as specimens dated from as long as 150 years ago to try to determine whether loss of genomic diversity is yet another threat to honey bee health and viability. This study became possible only with the advent of modern tools for sequencing fragmented historic DNA samples.

The researchers expected to find a "genetic bottleneck" due to continued selection and pest/disease impacts on managed and feral honey bee populations, but instead found the inverse! It appears that genetic diversity has even slightly increased, probably due to modern apicultural practices.

The team also identified that genes linked to xenobiotics (foreign substances) appeared to have been selected over time, indicating possible selection pressure due to chemicals used in agriculture and apiculture over the last century. 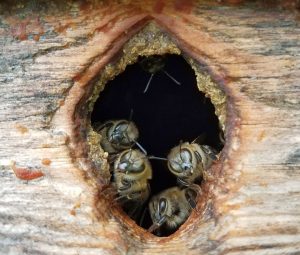 Understanding the genetic and environmental factors that enable some feral honey bee colonies to tolerate pathogens and survive the winter in the absence of beekeeping management may help lead to breeding stocks that would enhance survival of managed colonies, according to a study led by researchers Including former MSBA speaker and doctoral candidate Katy Evans, at Penn State's College of Agricultural Sciences.

Their analysis revealed that differential expression of the genes hymenoptaecin and vago increased the odds of overwintering survival in managed and feral colonies. Feral colonies express immune genes at higher levels in response to high pathogen burdens, providing evidence for the role of feralization in altering pathogen landscapes and host immune responses.