No Murder Hornet Nest Was Located in Washington State (...but a Giant Asian Hornet one was)

On October 24, the Washington State Department of Ag Tweeted "Got 'em!" when they vacuumed several pounds of Asian Giant Hornets, unfortunately called "Murder Hornets" in the press, from a property in Blaine.

The department employed radio trackers and trappers to find and follow the hornets back to their nest, which was wrapped with plastic and then vacuumed clean by entomologists wearing super bee-suits.

In October, the Pennsylvania Department of Environmental Protection and Gov. Tom Wolf recognized Pittsburgh International Airport (PIT) with a Governor’s Award for Environmental Excellence for its airport apiaries.
The apiary, started by Master Beekeeper and local favorite Steve Repasky, began with a swarm catch on a Delta Airlines departure in 2012 and now includes 9 apiaries with around 110 colonies. In addition to Repasky’s work, PIT monitors the apiaries closely, with help from a USDA biologist, and has  partnered with local research groups and universities to provide data and conduct research on swarms and promote honeybee health.

A team led by Dr. Walter Farina of Universidad de Buenos Aires has found that it may be possible to enhance the pollination efficiency of honey bees by giving them a crash course in the scent of the target crop. 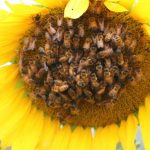 Their findings show that honeybees given food scented with odors that mimicked sunflowers supported a significant increase in sunflower crop production. “We show that it’s possible to condition honeybees to a rewarded odor inside the colony, and this experience modifies the bees’ odor-guided behaviors later,” says Dr. Farina. “The most surprising and relevant result is that the foraging preferences for the target crop are so prolonged and intensive that it promoted significant increases in the crop yields.”

The bees’ training led them to visit sunflowers more. Those trained bees also brought more sunflower pollen back to the hive. This increased visitation and foraging on sunflowers also boosted the flowers’ production of seeds by 29 to 57 percent.

“Through this procedure, it is possible to bias honeybee foraging activity and increase yields significantly,” Farina says. “In other words, pollination services might be improved in pollinator-dependent crops by using simple mimic odors as part of a precision pollination strategy.”

The researchers say they are now studying other pollinator-dependent crops, including almonds, pears, and apples. Ultimately, their goal is to develop an array of new odor mimics to improve pollination efficiency and productivity of many important agricultural crops.

Hives in in Uinta-Wasatch-Cache National Forest

As suitable sites become scarce, commercial beekeepers are increasingly moving their hives to U.S. public lands. But scientists warn that the millions of introduced honey bees pose a risk to native species, outcompeting them for pollen and altering fragile plant communities.

In July, the conservation group "Center for Biological Diversity" petitioned the US Forest Service to slow down the pace of approvals for managed honey bee colonies on national forest lands, citing data that "a single honeybee apiary of 40 hives consumes enough pollen in one month to feed more than 1.3 million native bees."

Some bee experts argue that no amount of honey bee hives is safe on public lands. A 2016 study published in the journal Conservation Letters found a single honey bee hive extracts enough pollen in one month to rear 33,000 native bees. If this figure is multiplied across apiaries with 100 hives, such as what is permitted in some national forests, entomologists say it could imperil the ability of wild pollinators to sustain their populations.

But as scientists study and conservationists debate the ecological impact of these honey bee introductions, commercial apiarists say they have no choice but to use public land.

“I lose yards every year because a subdivision is going up,” said Cox, a fourth-generation beekeeper who parks 592 of his 5,700 hives on national forests northeast of Salt Lake City each summer.

“We are running out of land,” he added. “We’ve reached the carrying capacity for managed bee hives in the U.S. — without access to public lands our livestock could be in peril.” 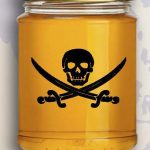 has been circulating a PDF that raises concerns about the purity and safety of honey imported into the United States.

Claiming that "Honey is the world's 4th most faked food, the Honey Authenticity Project aims to provide information and independent testing of commercially available products. Real honey is a pure and natural product that is protected with both a legal and scientific definition. It is troubling that consumers are unknowingly consuming adulterated products."

To combat "honey laundering," the group proposes a product logo program which certifies that honey for sale has received tests for purity and safety and other protocols to protect both bees and hive products. 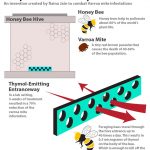 Many of us have had the experience of those closest to us finally understanding how bad varroa really are, and trying to brainstorm solutions. Well, Raina Jain, a teenager from Greenwich, Connecticut, is on our side and the bees' too, and she's done a bit better than that!

Raina has created a hive entryway that deposits small amounts of thymol onto bees, aiming to kill off mites while not harming bees, honey, or wax. Each day a forager will go through the entryway about 40 times. Each pass replenishes the thymol. In a lab setting, she discovered that the varroa mite population dropped by 70% after three weeks.

Her project was inspired by the work of Dr. Samuel Ramsey, and enlisted volunteer beekeepers in California, Connecticut, Florida, Georgia, Nevada and Rhode Island.

[Back to the November 2020 Beeline newsletter]