Home »Beeline»Enough with the “Murder” Hornets 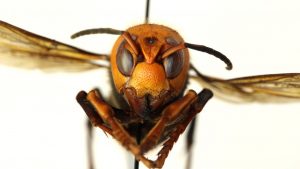 There is no such thing as a "murder hornet"

As of May 29, a total of three sightings (two dead individuals, and a nest in Canada that was eradicated) have occurred in North America. To put this in perspective, they have been established in France since 2004. Their impact? Beekeepers in France are having a bumper honey crop this year, and their biggest problem is finding a way to get it to market in the age of COVID-19. The Japanese, who occupy their native habitat, actually eat them (pan frying is recommended) and sometimes put them into alcoholic beverages for a trippy, numbing effect.

Harvard biologists Dr. Benjamin de Bivort and Dr. James Crall add, "Both wild bee populations and managed honeybees face a slew of critically important threats. … I think the giant hornet ranks well below all of these in terms of what keeps me up at night.” On their list of greater threats are factors we are all unfortunately very aware of, including climate change, industrialized agriculture, and pesticides,

But our neighbors are scared witless, and many larger hornet and wasp species near us are being killed in the hundreds, if not thousands, by frightened folks who just cannot believe that three dead hornets 2,000 miles away are not an imminent threat. Some species, like the European Giant Hornet, are similarly large, but are also not native. Others, such as the Cicada Killer Wasp, are gentle, essential natives to our ecosystem who are being killed in droves. I know because of the large numbers of photos of dead individuals being forwarded to me from across my non-beekeeper network of friends.

Attached are some links to helpful resources you can share with your neighbors, as well as some photos (borrowed liberally from academic and environmental websites that are also trying to calm fears and stop the carnage).